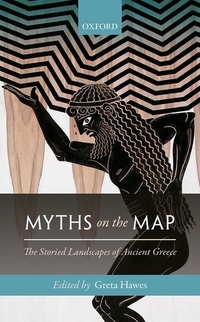 Diversity, or "diverse perspectives" (5), is the key word to the volume in question here. Most of the papers stem from the sixth Bristol Myth Conference held in 2013. In her introduction "Of Myths and Maps" (1-13), the editor Greta Hawes programmatically declares that the volume "makes a virtue of variety" (1). Important theoretical approaches within the spatial turn are mentioned briefly, yet they are more allusions for the informed reader than concepts leading through the volume.

Only few of the fifteen contributions can be highlighted here. Speaking of concepts, Daniel W. Berman, in "Cities-Before-Cities: 'Prefoundational' Myth and the Construction of Greek Civic Space" (32-51) introduces a new one. By discussing examples from Boiotian Thebes, Croton and Athens, he exemplifies his understanding of prefoundational tales as stories "of cities-before-cities that prepare, configure, or reconfigure, in a conceptual sense, the mythic ground for foundation" (32). He is certainly right that the preparation of places and living-conditions was an important part of local myth and that prefoundation does not necessarily imply a chronological layer anteceding the foundation of the city, but is to be understood as a narrative strategy claiming antiquity (51). However, to shape the concept more precisely, emic and epic perspectives could be separated more clearly, and we should take into account that the telling of stories also had a history. Berman's conclusion: "Such narratives [...] are more often cultic or mythic (or, perhaps, 'religious') than they are 'political' (in the sense of 'about a polis') and have a particular ability to encapsulate the shifting and developing identities, affiliations, conflicts, and ideologies of cities as they grow and change" (51) is a quote-unquote conclusion inviting to discuss the relation of the mentioned terms. Is the mythic really a contrast to the political?

The establishment and shaping of categories is a virtue (cf. especially Elizabeth Minchin with the excellent paper "Mapping the Hellespont with Leander and Hero. The Swimming Lover and the Nightly Bride", 65-82, who discusses the effect of emotions on mechanisms of memory); the neglect of scholarship written in any language but English is not. In some contributions, the last habit leads to self-referential ways of citing recent contributions. Well-known books in French or German are cited, but certainly not read, sometimes declassified to path the way for new work to be done: a re-invention of tradition circling around recent scholarship in English. This may be first and foremost the problem of European scholars, who are afraid of being neglected and finally forgotten because they do not publish everything in the modern koine. Whether we should give up diversity in publishing is a problem that has no clear solution. However, to avoid one-sided scholarship, diversity of languages and reading facilities is a virtue indeed.

Stephanie Larson, in "Meddling with Myth in Thebes. A New Vase from the Ismenion Hill (Thebes Museum 49276)" (106-121), puts an Attic red-figure vase found at Thebes in 2012 into the context of Theban myth-making. She begins by presenting Pindar as a "manipulator" of myth (107 passim), who stressed Boiotian roots of Panhellenic well-known mythical topics. This is certainly not new. What is more, the concept of manipulation with a view to myths is very problematic given the fact that myths, by definition, were and are characterized by diversity. Whether in oral or written contexts, the re-telling of myths always demanded a new focus on well-known stories that survived due to their capacity of being re-shaped or re-used again and again, if implicitly or consciously. Perhaps a clearer definition of the core concepts underlying the volume would have helped. Diversity in this sense is no virtue here. Consequently, Larson discusses the vase by relating it to the iconographic and literal background of sphinxes at Thebes. She concludes that a Theban commissioned the vase and initiated the depiction of sphinxes substituting canonical elements of a widely known grypomachy scene in order to express his Theban identity. By doing so, she presents an interesting piece of evidence illustrating aspects of Theban identity. One only wonders where the links to the topic of the volume are hidden, especially given the fact that the sphinx would be an excellent example of how real and mental topography had an impact on Theban mythology.

Other papers explicitly discuss the relation between myths and space. Katherine Clarke ("Walking through History: Unlocking the Mythical Past", 13-31) stresses the importance of experiencing landscapes as landscapes of myth and memory by walking through them. Her conclusion that historical or mythical narratives linked "past and present time through space" (31) would be subscribed by Julie Baleriaux, whose contribution on "Pausanias' Arcadia between Conservatism and Innovation" (141-158) relies on the observation that the emphasis on the deep antiquity of Arcadia was closely connected with the needs of changed living-conditions in Roman Greece. Emma Aston highlights the local dimensions of centauromachies told and used in Thessaly by closing with general considerations on the interface between local and Panhellenic elements in widely known mythical tales ("Centaurs and Lapiths in the Landscape of Thessaly", 83-105). Jeremy McInerney, in "Callimachus and the Poetics of the Diaspora" (122-140), concludes: "The fuzziness of myth in relation to time stands in contrast to the specificity of location" (140). A different approach is chosen by Christina A. Salowey in her interesting paper on "Rivers Run Through It. Environmental History in Two Heroic Riverine Battles" (177). She depicts, in which way geophysical characteristics of the rivers Scamander and Achelous are mirrored in myths about Achilles, or Heracles, struggling with them. Comparably, Betsey A. Robinson, in "Fountains as Reservoirs of Myth and Memory" (178-203), concentrates on the importance of fountains in Roman Corinth and Ephesus. In contrast, the following four chapters focus on mental or imaginary topographies (Aara Suski, "Scandalous Maps in Aeschylean Tragedy", 204-220; Iris Sulimani, "Imaginary Islands in the Hellenistic Era: Utopia on the Geographical Map", 221-242; Robert L. Fowler, "Imaginary Itineraries in the Beyond", 243-260; Charles Delattre, "Islands of Knowledge: Space and Names in Imperial Mythography", 261-280). Finally, Richard Hunter, in "Serpents in the Soul: The 'Libyan Myth' of Dio Chrysostom" (281-298), illustrates of how the landscape of Lybia is taken allegorically for characteristics of the human soul.

Anything goes? Overall, the volume is a "Sammelband" in the true sense of the word by collecting various contributions of higher or lesser quality related more or less strictly to myths and their topographical or geographical implications. Richard Buxton, in his article "Landscapes of the Cyclopes" (52-64), rightly states that modern mythographers tried to put the cyclops into groups to discuss them along categories the Ancients did not use. This is a potentially problematic way of framing ancient myths, if you want to come close to the emic perception of related tales. In an analogue manner, you could ask whether the reader of the volume is called to search for underlying concepts of myths on the map which the volume as a whole does not provide explicitly. Nevertheless, many of the papers deserve a close reading.