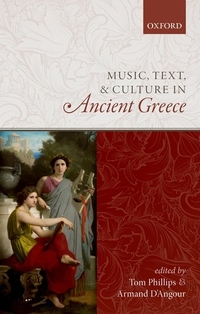 Greek lyric was performed, not only recited, but sung. This conviction, once revolutionary, is state of the art, and rightly so. Yet, it is very difficult to get an idea of how the relation between music and text can be imagined within this foregone performance culture. As we almost totally lack the sources describing the music, "it has become a scholarly topos to pair an emphasis on music's importance to performance poetry with acknowledgment of our ignorance of its working," as the editor Phillips stresses (2). The present volume offers answers by approaching the issue from different angles. In addition to the "Introduction: Music, Text, and Culture" by Tom Phillips (1-13), a bibliography and an index, the volume is divided into two parts. "Part I. Interpretation" (15-135) focuses on the relationship between words and sounds in performed poetry. "Part II. Theory, Reception, Contexts" (137-255) poses the question of how the ancients understood the relation between music and text, or text and music.

In fact, it is not easy to say which one of the two has to be named first. Traditionally, scholarship would have put the text onto the first position because this is what we know far better due to the nature of our sources, and this is what is, accompanied by rhythm, much easier to describe. That 'music' precedes 'text' in the title of the volume might be owed to the focus on new methods of research the volume is addicted to. Should we turn the relationship upside down? The volume does not do so. However, when doing research on sounds, sounds become very important. And as we lack explicit sources to revive the sounds precisely, we very much depend on imagination and suppositions.

To give an example, I discuss the contribution by Armand D'Angour, "2. The Musical Setting of Ancient Greek Texts," in more detail. In contrast to John C. Franklin, who argues in favour of very old traditions lurking behind ancient Greek song by stating that Greek tuning systems were derived from Assyrian and Babylonian models ("1. Epicentric Tonality and the Greek Lyric Tradition"), D'Angour stresses the continuity to modern Western music tradition. He discusses examples from the Greek past that range from musical effects in Homer over choruses in Euripides to the song of Seikilos from the second century AD. In an exemplary way, he thus covers thousand years of Greek music history. In contrast to improvisation that dominated the performance of Homeric song, Euripides is grouped within the so-called New Music, a "revolutionary change in musical style" that looked for new ways of instrumental and vocal expression and that "has been linked with the need for progressive melodists such as Euripides to find a way, for the first time in Greek musical history, to notate exactly how a song should be sung" (58). Though the author is cautious, he acknowledges "a historical continuity in the symbolism of melodic shape" (61). And this is a strong argument for thinking that we are able to re-imagine the foregone world of ancient Greek song. D'Angour concludes that the examples of Homer, Euripides, and Seikilos illustrate similar patterns of highlighting semantic and affective qualities of a text, and of structuring it, being visible over a thousand of years. And he continues saying that "the earliest music of Greece exhibits elements of symbolic and affective, no less than geographical and cultural, continuity with the wellsprings of the Western musical tradition" (72). Implicitly, he says much more. Implicitly, he does not only stress the great variability of singers performing songs when using melodization to make a special point. He also underlines that music, in relation to text, was very important from the beginning but that during the revolution of the 5th century BC, when notation was demanded to fix ideas of sounding, the autonomy of music towards the text was stressed. This very much reminds of European music history from Medieval Times down to the 19th century and beyond, from Gregorian chant to the so-called absolute music of the 19th century and the sophisticated Kunstlieder of the epoch.

In contrast to D'Armand's focus on melodization, chapter "3. Words and the Musician: Pindar's Dactylo-Epitrites" by Tom Phillips relies on rhythm as an affective dimension independent from verbal meaning. Oliver Thomas, in "4. Music in Euripides' Medea", joins the choir of the first articles by interpreting the musical performance of choruses as a vehicle for authorial comments on the arguments the chorus utters verbally. Sophisticated ways of composing a song are demonstrated in detail by Stelios Psaroudakes, in "5. Mesomedes' Hymn to the Sun: The Precipitation of Logos in the Melos."

"Part II. Theory, Reception, Contexts" reveals that ancient authors as moderns alike were concerned with the quality of music as a dimension not to be translated directly to the verbal sphere and as a vehicle for expressing emotion and engendering feelings on the side of the listener, briefly: music as an autonomous art. The locus classicus on the latter is Plato, who treats the anxiety of musical elements overwhelming the verbal meaning (Anastasia-Erasmia Peponi, "7. Lyric Atmospheres: Plato and Mimetic Evanescence"). Aristotle, in contrast, estimates the autonomy of music that should be enjoyed according to its own structure (Pierre Destrée, "8. Aristotle on Music for Leisure"). In "10. Disreputable Music: A Performance, a Defence, and their Intertextual and Intermedial Resonances (Plutarch Quaest. conv. 704c4-705b6"), Andrew Barker illustrates relating debates during the Second Sophistic. The power of imagination is demonstrated by Naomi Weiss, in "6. Hearing the Syrinx in Euripidean Tragedy," who shows in which way Euripides played with the imagination of his listeners by making an aulos being perceived as a syrinx. James I. Porter, in "9. Sound You cannot Hear: Cicero and the Tradition of Sublime Criticism," opens the discussion to the sphere of rhetorical concerns und thus to yet another sphere of cultural and social importance sounds accompanying every verbal uttering had.

"Interpreting the evidence requires a precarious mixture of imagination and caution" (2), Phillips rightly emphasizes in the introduction. It is easy to put the finger on the weak spots by unmasking precarious imagination. On the contrary, the power of imagination having been invested to make a world visible to us that would be lost otherwise is to be praised. The authors are real experts on their topics and discuss them in a detailed, passionate manner. Of course, the reader does not have to follow every reconstruction or every single argument. However, everybody interested in ancient Greek lyric, music, and performance culture will be rewarded with a rich repository for very general but also very specific questions tackling these issues.