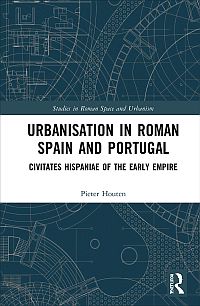 First of all, it may be of interest to offer some information that will help to better contextualise this work. It is the result of the PhD dissertation that its author, Pieter Houten, presented at the University of Leiden at the end of 2018, under the supervision of J. Bintliff and L. de Ligt. The work was part of an ambitious European project (ERC Project), dedicated to the characterisation of the Roman urban phenomenon from a territorial point of view: "An Empire of 2000 cities" (de Ligt & Bintliff 2019, Regional Urban Systems... Brill). Among the different approaches addressed in this project, one aimed at defining the settlement strategies in the different regions of the Empire, and these were entrusted to several researchers. The Hispanic provinces were the responsibility of Pieter Houten, who already had extensive previous research experience in Spain, and was part, for example, of the dynamic Toletum research group, coordinated by S. Panzram (Univ. Hamburg) and dedicated to Hispanic studies between Antiquity and the early Middle Ages.

Undoubtedly this background raised high expectations for the publication of a new study on urban planning in the Iberian Peninsula during the early Empire. This was a subject on which enormous progress had been made in recent decades, especially in terms of a more balanced reading of the Romanisation phenomenon, giving a greater voice to the contributions of the different cultures in interaction. This was reflected in the settlement patterns, Rome's colonisation strategy, and, above all, its intelligent use of existing social and organisational structures, depending on the territory. It is essential to understand these phenomena in terms of political economy, according to which Rome was able to take advantage, respecting and maintaining, a good part of the pre-Roman patterns. This was especially evident in those schemes with which it shared the deepest cultural affinity, as in the case of the south and east of the Iberian Peninsula, with a notable eastern influence.

The study includes a very interesting and necessary reflection about terms as "city" or "urban" (chap. 1), a key point of departure to deal with the complex characterization or the settlement patterns in the Iberian Peninsula in Roman times. Although the fact of choosing a series of parameters to identify and measure them, unfortunately, simplifies the ancient panorama, the ones selected (monumentality, status, evidence of magistrates, etc.) show a prior deep analysis of the possibilities of all of them. Parameters as the size are always more problematic and limited to more subjective lectures of the archaeological evidence, recorded in the bibliography of varying quality, and according to not always homogeneous criteria. In fact, in many regions of Hispania, for an adequate interpretation of the concept of "size", it is necessary to know the territorial settlement patterns beforehand. In this sense, Pieter Houten's study very aptly delves into questions related to the different features and hierarchy network of the nuclei in the different large geographical and cultural areas. The author's analysis of the existence and prominence of secondary agglomerations (chap. 4), dispersed civitates (better than civitates sine urbes) (chap. 3.5), and the dynamics of synoecism is particularly valuable in terms of population patterns and the design of the Hispanic territory. Here, perhaps, it is worth reflecting on the possible comparison of these categories with those found in other provinces of the Empire, such as the well-studied agglomérations secondaires in Gaul.

The contents of the volume deal with more classic -but absolutely necessary- topics in Ancient History/Archaeology, such as the information from the literary sources, the epigraphy, the mints, or the toponymy, to continue with the incorporation of new analytic tools like the rank-size analysis. In the use of this last methodology, a coherent and respectful approach to the ancient reality is to be very welcomed, given the fact that in last years not all the studies based on it show an appropriate balance between new technologies and ancient settlement parameters. The incorporation of this perspective to the urbanization of the Hispaniae as a whole and the interpretation of the results obtained is one of the main contributions of Pieter Houten's study to the current state of art. However, in these quantitative approaches, it is always necessary to be prudent, insofar as the data can be highly conditioned by the state of knowledge and research. This is the case, for example, of the analysis of the monumentalisation of cities carried out in the fifth chapter. In it, special relevance is given, as case studies, to the so-called "spectacle" buildings, taking into account aspects related to size and capacity. These aspects are not always easy to evaluate adequately through the available bibliography on buildings that are still poorly known or even excavated for a while.

Finally, the volume includes two annexes (273-403) in the form of tables, in which the most relevant and useful information on the cities considered in the study has been synthesised. They collect data on the legal status, coinage, public buildings, and surface area, all supported by the most relevant ancient literary sources and recent bibliography.

All things considered, the handy volume now published by Routledge could respond to several demands. The first, and most often expected, was yet another general study of Hispania by a non-Hispanic author, useful for an Anglophone audience, but with little to contribute to regional research. The second, a new analytical and well-documented work, with new interpretative and methodological contributions, which could enter fully into the scientific discussion on the phenomenon of urbanisation in Hispania. Fortunately, Pieter Houten's good work makes the latter possible. The author shows a very deep knowledge not only of the Spanish bibliography but also of the state of research and the "hottest" scientific debates in both modern countries, Spain and Portugal. In the same way, the study incorporates the current discussions on the interpretation of the "Romanization" processes in Hispania, very often simplified by non-Spanish authors.

Although the chronological framework is limited to the Early Empire, the author does not leave behind the fundamental problematic related to the relevance of the different cultures found by Romans at their arrival at the Iberian Peninsula. Although a better knowledge of the urbanism patterns in the northern area of the Iberian Peninsula is noted, the general approach to the whole territory is quite equilibrated. The study reflects adequately the cultural complexity of the Roman provinces of Hispania and the different responses to urbanization patterns.

Houten's work thus becomes part of the group of reference studies on Hispania that must be known and handled today.